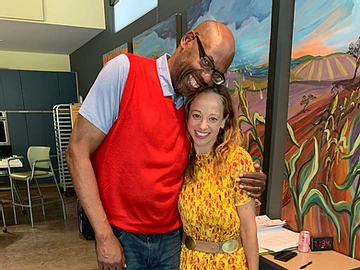 “My go-to dish is grilled salmon with wilted spinach and fresh garlic.”
We’ve just met, and the tall, elegantly dressed man has already distracted me with thoughts of a savory meal. He grins.
“I love making that dish. I also do potatoes with rosemary and onions.”
This is Julius Rhodes, founder and principal of the mpr group in Chicago. He’s a successful entrepreneur who loves to cook and sees food as a way to bridge cultural divides. He’s also an enthusiastic supporter of Common Threads.

Years ago, he saw an ad in his local church about a new children’s program and thought it was worth checking out for his two children. The program, Common Threads, was actually in its infancy and Julius’ children wound up being in the very first class. Founders chef Art Smith, Jesus Salgueiro and Linda Novick O’Keefe set out to not only teach young people about healthy eating and cooking, but also create awareness around the issues of diversity and inclusion – something for which Julius also has a passion for. It seemed a natural fit, so he and his kids showed up, and they were so impressed that they kept coming back and Julius joined the board.

In his seven years on the Common Threads board of directors, Julius applied his contagious enthusiasm to help develop the new Common Threads brand and identify growth opportunities. Board meetings were often held at the Chicago home of Art Smith and Jesus Salgueiro. “We were on the front lines of something that had truly never been done before,” he says.

Julius is proud that Common Threads offers not just lessons in food preparation and nutrition, but also safe environments in which to learn, be supported and grow.

“The thing I would want people to know and understand about Common Threads is that they teach values. They teach lessons that last a lifetime. And the things that they do are generational,” says Julius. “They’re taking individuals from a wide range of backgrounds and allowing them to participate in something that, if done correctly, will benefit them, will benefit their children and their children from a lifetime perspective.”
Julius says his kids, now adults, gained some lasting lessons from their experiences with Common Threads.

“They would say, without a doubt, it was one of the most enjoyable times of their lives. We did so many things, meeting with chefs like Gale Gand and Tyler Florence and Art Smith. They got a chance to see some of these individuals, who they really looked up to and aspired to be like, in the flesh and realize that aside from what you see on TV, they’re just like you and I.” As adults, his kids still cook, he says.

“They took away the idea that food is a resource, something to be valued, not just something to be eaten if you don’t want to dispose of it, but how to prepare nutritious meals, healthy meals, that you enjoy eating and enjoy seeing others eat. And they also took away the issues and the value of diversity as well.”
And why does he think Common Threads worked for his kids? Couldn’t they have learned about cooking by watching cooking shows and celebrity chefs on television? Julius makes it clear how important the face-to-face contact and hands-on involvement are.

Over the years, Common Threads has exceeded all of Julius’ expectations, yet its mission to educate under-resourced children and families on the importance of nutrition and physical well-being, empowering them to be agents of change for healthier families, schools, and communities is as relevant today as it was when he and his kids attended that first class.

“The thing I would want people to know and understand about Common Threads is that they involve children in areas that teach them life lessons. Not just in terms of food preparation or food security, but also how to engage with others through the realization that food teaches you about culture. It teaches you about life – seeing young kids learn about different cultures, learn about food preparation, understand the issues around food instability and the waste that we generate from our food supply. Teaching children, engaging children at a very young age in the essential nature and the benefits of a healthy lifestyle, and protecting our food resources to create stability in their lives and the lives of others is just a mission that’s so easy to get connected to and one that I’m so very proud to have been a part of.”